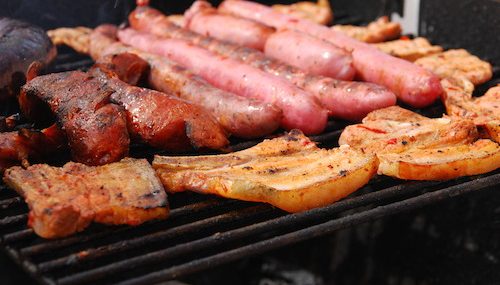 Is Grilling Actually Good For You?

Now that summer is in full swing, it’s time to start planning outside barbecues and putting good use to that grill you cherish oh so much. But before you start grilling to your heart’s content there are some things you should know about the health risks of grilling. Yep, that’s right, it turns out although you’ve been trained to believe that grilling is a healthy alternative to cooking, food research shows that grilling meat, fish, and chicken produces cancer-causing carcinogens.

According to the American Institute of Cancer Research, cooking muscle proteins under high heat produces carcinogenic compounds called heterocyclic amines (HCAs). HCAs can damage the DNA of your genes, beginning the process of cancer development.

“Consumption of HCAs is most clearly linked to cancers of the colon and stomach. One study found that people who eat the most barbecued red meat (beef, pork, and lamb) almost doubled their risk of colon polyps, compared to those who did not eat these foods. Colon polyps can develop into colon cancer. Some evidence also suggests that these carcinogenic compounds can travel through the bloodstream to other tissues. This would explain why HCAs could be a factor in breast cancer and other cancers.” – AICR website

Additionally, when the fat from the meats drips onto the hot coals, the smoke that it causes contains polycyclic aromatic hydrocarbons (PAH).

Not all is lost though, here are some ways you can reduce the number of carcinogens produced when grilling meats.

Flipping frequently reduces the amount of char on your meat, which is what contains most of the carcinogens.

When the fat drips onto the hot coals of the grill, the smoke that comes up is full of carcinogens. Trimming the fat will help keep the dripping to a minimum.

According to The American Institute for Cancer Research, marinade acts as a barrier between your meat and carcinogens. Marinade for at least 30 minutes.

In fact, cook your meat less. The less exposure to the smoke and flames the better. Bad news for those who like it well done – you end up with way more carcinogens than if you cook it rare or medium-rare. Another way to reduce the time meat spends on the grill is to skewer it; the smaller pieces will cook faster.

Besides the fact that processed meats just are not good for you, they produce the most carcinogens.

Keep the flames at bay

Finally, be sure to clean the grill thoroughly to get rid of carcinogenic residue.

Meat may be bad to grill, but veggies are fine so load your grill up with veggies this summer and you should be fine.