Don’t Give In To Overeating During This Holiday

Don’t Give In To Overeating During This Holiday

With the holidays coming up, an abundance of food and the temptation of overeating is 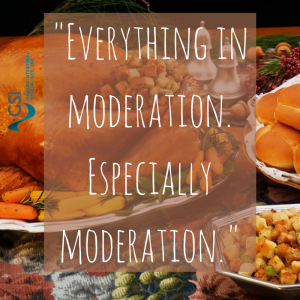 everywhere. Whether it’s the extra plate you eat at Thanksgiving dinner, or the three slices of grandma’s pie at Christmas, overeating can be tricky, and it can be hard not to cave in and grab an extra piece of something handed to you at the table. As hard as it seems not to, eating until you are uncomfortably full is not recommended. Overeating can cause damage to different parts of your body that just isn’t worth the long-term damage.

Researchers at Harvard School of Public Health have reported that overeating may destroy your body’s regular metabolic response. When you overeat, excess nutrients attack cells that contain PKR, and the cell’s response is to shut down your body’s metabolism because the extra nutrients are perceived as a threat. This can lead to metabolic disorders such as diabetes and obesity. When your body’s metabolic system shuts down, an overwhelming amount of mental and physical ailments can ensue.

Your digestive system can take a low blow with overeating as well. If you are frequently overeating, your digestion system can start to deteriorate, which can affect your entire body. One common problem caused by overeating is called gastroparesis, paralysis of the stomach, which is very difficult to treat. Gastroparesis happens when your stomach is stretched out so much that the muscles that aid in the digestion of food stop working properly. When this happens, vomiting, nausea, and indigestion can follow. Another problem that can be caused by overeating is toxic buildup in your body, which can cause weight gain, high blood pressure and a variety of other health problems.

While indulging your sweet tooth may seem innocent now, in the future, it may not work in your favor. The holidays are a tough time to follow through with a healthy diet, but all hope is not lost! Here are a few things to consider:

– Think of your stomach like a balloon, it can stretch but it has its breaking point. All of the pressure that has been built up needs to be released at some point.

– The capacity of your stomach is about a quart, so keep that in mind when you are eating and try not to go over that amount.

– Drink water before you eat a large holiday meal. You will fill your body with more water than food and thus feel full quicker.

– Limit yourself to one plate of food at the table, if you would like to get seconds or thirds, consider a take home plate to eat later.

– Sit and savor your food when you’re around friends and family. The more you are mindful of your food, the fuller you’ll become.

While overeating around the holidays is easier than you think, as long as you are mindful of what you are putting on your plate and into your body, you can overcome it and enjoy the holidays.