Diverticulitis: What It Is And How To Diet Around It 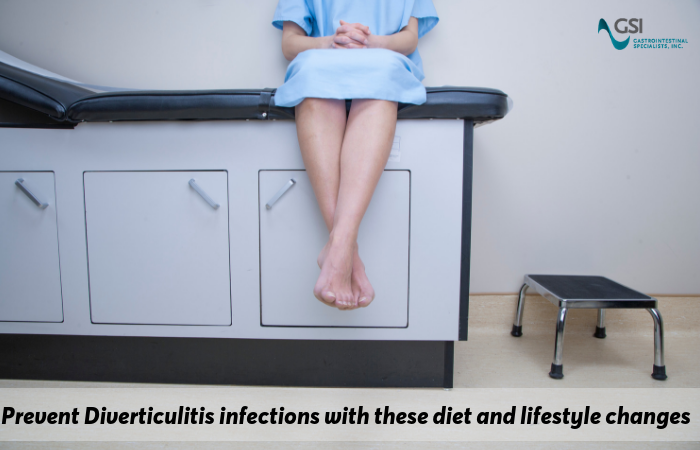 While some people might go months or years without ever experiencing symptoms of diverticulitis, the risk comes with an increased likelihood of forming an infection. Although the infection is treatable, it can also be prevented with diet and lifestyle changes.

Symptoms Of Infection or Inflammation And Treatment

Common symptoms of diverticulitis include:

Common risk factors include some of the usual suspects, such as obesity, smoking, lack of exercise, and of course, poor diet. It’s never too late to start combatting your chances of getting diverticulitis by adopting a healthier lifestyle.

If you are going to take on tasks like quitting smoking or exercising more, start small and take these items one day at a time. However, if you feel as though you are at a greater risk because of your previous health decisions, then starting with your diet is a great first step.

Changing your diet can help a lot with prevention when it comes to diverticulitis infections. Stick to foods high in fiber (like beans, vegetables, and fruit) that increase the bulk of your stool and create more consistent bowel movements. One important thing to note: if you’ve already had an infection from diverticulitis, then avoiding foods high in fiber for a bit is actually more beneficial (more on this later).

Some foods to avoid if you’re at risk of diverticulitis include those high in fat and sugar, such as red meat, refined (modified) grains, full-fat dairy, and deep-fried foods as these are hard on the digestive tract. Harder foods like nuts, popcorn, and seeds run the risk of tiny particles getting lodged in pouches, which could cause an infection.

Post-infection is usually a liquid diet at first of water, fruit juices, and broths. After that, you’ll start easing in with foods low in fibers, such as white bread, pasta/rice, canned or well-cooked vegetables, and fruits without skins/seeds; as well as tender meats, fish, eggs, and tofu for protein and milk-based foods such as yogurt or cheese.

Dealing with diverticulitis is no easy task, but manageable with time. Check-in with your doctor to see not only if you’re at risk, but the specific steps you should take based on your health if so. As prevention is key, the sooner you knock this out, the sooner it can become an afterthought, giving you a better peace of mind moving forward.

We made a commitment at the start of the pandemic to keep our patients, their family members, our providers, and our staff safe. We have remained true to this commitment. We will continue to do so by following guidance from the Centers for Disease Control, the Virginia Department of Health, and the Governor.

We have resumed in-person office visits and have been so happy to see patients in person again. We missed you.

We know that colorectal screenings, and especially colonoscopies, prevent cancer and save lives. Some patients delayed preventive care such as screening colonoscopies and annual skin cancer check-ups during the pandemic. If you are one of them, we encourage you to delay no longer. Preventive care saves lives.

We look forward to serving you, your family, and your friends.

Thank you,
The physicians and staff of Gastrointestinal Specialists, Inc.