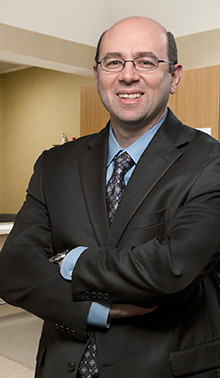 Dr. Souheil Abou-Assi has been with GSI since 2006. A native of Abadieh, Lebanon, Souheil received his Bachelor of Science degree from College la Sagesse there. He attended Saint Joseph University in Beirut from 1988 to 1995, attaining his Doctor of Medicine degree. He then travelled to America and did his Internship in Internal Medicine at Robert Wood Johnson Medical School in Camden, New Jersey. He went on to complete his Residency there in 1998.

From 1998 to 2001, Dr. Abou-Assi trained at the Medical College of Virginia as a Fellow in Gastroenterology and Hepatology. He practiced at MCV and at McGuire Veteran’s Administration Medical Center as an assistant professor of medicine in Gastroenterology and Hepatology until the end of 2005. During his tenure at the VA, Dr. Abou-Assi served on the steering committee of the Advanced Clinic Access and also as the Director of GI/Hepatology outpatient services.

Dr. Abou-Assi became busy very quickly upon joining GSI in 2006; he has developed a loyal following of patients and a steady stream of new patient referrals. He is known for his boundless energy as well as his commitment to getting the most out of each day.

Dr. Abou-Assi is an active member of the Medical Executive Committee and the Physician Excellence Committee of Saint Mary’s hospital.

Dr. Abou-Assi is fluent in three languages, English, Arabic and French. His hobbies and interests include biking, playing tennis, reading, traveling and fishing.