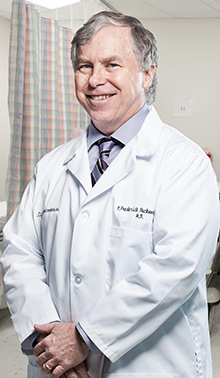 While at UVA, Dr. Duckworth was named as a finalist for the Bowman Scholarship for outstanding achievement in the clinical years. He was given the Outstanding Intern award while completing his Internship at The Medical College of Virginia, where he also completed his Residency in 1987.

He then served as a Chief Resident in Internal Medicine in 1988. Dr. Duckworth stayed at the Medical College of Virginia completing his Fellowship in Gastroenterology in 1990. He served as Chief Fellow in Gastroenterology in 1991 and then stayed on the faculty as an Assistant Professor of Medicine for a year before joining Gastrointestinal Specialists, Inc in July 1992.

Dr. Duckworth has served as the Chief of Endoscopy at Bon Secours Memorial Regional Medical Center from 1994 to the present. He has also done committee work with the hospital – laser, clinical practice, and physicians advisory. In addition, Dr. Duckworth has been very active in the Virginia Gastroenterology Society serving as the annual Course Co-Director in 2002, Secretary 2003-2005, Treasurer 2005-2007, President 2007-2009, Past President 2009-2011 and still serves on the Board of Directors.

Dr. Duckworth and his wife Kathy have three children. Kathy and Dr. Duckworth are very active in community life at their church, Christ Church Episcopal and he has previously served as an Assistant Scoutmaster in Troop 747 at Gayton Baptist Church. He enjoys fishing and woodworking in his spare time.