Hemorrhoids (also known as piles) are swollen veins in the lower rectum that lump together causing pain. This is a medical issue that can affect both men and women and is found to be more common among adults. You are most likely to develop hemorrhoids after age 30 and by age 50, about half of the population will have experienced this condition. Although hemorrhoids aren’t life threatening, they can cause a substantial amount of pain and discomfort. There are two types of hemorrhoids that can develop. 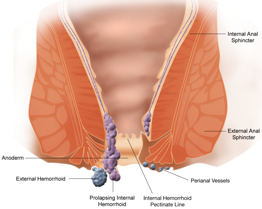 Hemorrhoids are caused by an excessive amount of pressure on the veins in the lower rectum. There are many factors that contribute to the likelihood of suffering from hemorrhoids. They are increasingly more likely with age as the tissues in your rectum become weaker and stretch over time. However, you are still susceptible to developing hemorrhoids at a younger age. Pressure can be caused on your anus by a variety of lifestyles and situations. Some factors that increase pressure to the veins in your anus are:

External hemorrhoids are more easily identifiable. These bluish bulges can be diagnosed by simply looking at them. They tend to appear spontaneously and cause a great deal of pain when sitting, straining or cleaning the area.

Some common symptoms of internal and external hemorrhoids are:

How long do hemorrhoids last?

There is an undetermined amount of time during which a hemorrhoid can last in your system. In many cases, minor hemorrhoids can reduce in size and resolve on their own but this is only possible for very low grades of hemorrhoids that they often are not even diagnosed. Hemorrhoids that have become so serious that they have been diagnosed will not go away on their own. Leaving them without treatment can cause them to get progressively worse over time, growing in both size and number.

Not all cases of hemorrhoids need to be addressed by professionals but they do require some form of treatment to go away. Depending on the grade, frequency, and condition of your hemorrhoids, you can use home remedies and medications or seek medical attention to address the issue.

If you are prone to hemorrhoids, you can take steps to prevent them from growing faster and larger. Although there is not one specific cause of hemorrhoids, certain lifestyles make you more prone to developing them. Your exercising and eating habits contribute a great deal to how likely you are to suffer from hemorrhoids. Adjusting your diet to include fiber-rich foods, exercising regularly and having good posture can greatly reduce your chances of growing hemorrhoids.

Obese and pregnant people are more likely to have hemorrhoids because of the pressure a large stomach can put on the veins in your lower rectum. Obesity is also correlated with a poor diet, which can make bowel movements difficult. Constipation or straining while passing a stool are also likely when you are obese or pregnant, which ultimately increases your likelihood to develop hemorrhoids.

There are many ways to shrink hemorrhoids in order to lessen the irritation and pain. These measures can be taken before seeking medical attention for lower-grade internal hemorrhoids. Some of the most effective home remedies for hemorrhoids are:

Aside from home remedies for hemorrhoids or treatments you can get from a store, the only other way to deal with hemorrhoids is to have them removed. Hemorrhoids that are causing you serious pain can be embarrassing and inhibiting. These extreme cases will never resolve themselves; they will worsen over time unless medical attention is sought out.

There are two popular methods of removing hemorrhoids:

What kind of doctor treats hemorrhoids?

Any regular family doctor or practitioner can diagnose your hemorrhoids but you will need to contact special doctors for the actual treatment. Preferably, you should visit a gastroenterologist, general or colorectal surgeon, or a proctologist if you require medical attention for your hemorrhoids.

Learn more about hemorrhoid banding and which doctors at our practice perform this procedure.