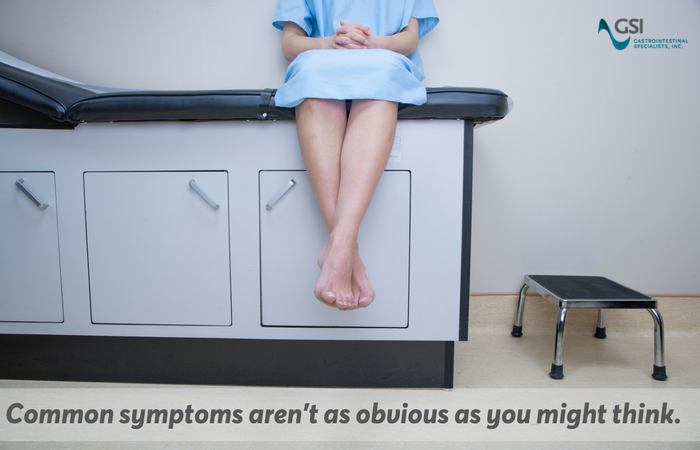 Common signs of Crohn’s Disease are not as obvious as you think.

Inflammatory bowel disease (IBD) affects approximately 1.6 million Americans. Of them, approximately half, or an estimated 780,000, suffer from Crohn’s Disease. Crohn’s is a chronic, lifelong inflammation of the digestive tract. The disease affects both men and women equally, and is typically diagnosed between the ages of 15-30.

Diagnosing Crohn’s Disease can be a difficult task. Unlike ulcerative colitis, which exclusively appears in the colon, Crohn’s isn’t just confined to the colon. Typically, Crohn’s begins in the small intestine and joins the large intestine, but it can appear anywhere from the mouth to anus, with symptoms manifesting in several different forms.

Although the true cause of Crohn’s is currently unknown, it’s believed that a combination of immune system problems, genetics, and environmental factors together are responsible. Of those with Crohn’s, up to 20 percent have a blood relative with IBD in some form.

Symptoms are triggered in a number of ways. With Crohn’s, the immune system abnormally attacks healthy bacteria in the digestive tract. Stress, food, and even the lining of your stomach can aggravate this inflammation. Since symptoms do vary from person-to-person, what constitutes a flare-up depends on what one considers “normal” on a daily basis. Crohn’s requires constant treatment, so it’s best to stay ahead of a flare-up as much as humanly possible.

No matter your experience with Crohn’s, here are a few important symptoms to always watch out for.

Crohn’s can make eating quite painful. Unexpected weight loss, caused by constant fatigue, poor appetite, and bowel obstructions by difficult-to-digest foods, can all be quite jarring for those new to Crohn’s. Frequent nausea also plays a role in weight loss.

Abdominal pain
Cramps and stomach pain, especially if severe, should serve as a warning. This can occur more frequently around mealtimes, but may be indicative of ulcers or intestinal blockage.

Diarrhea
Many Crohn’s patients experience a recurring need to evacuate their bowels. Diarrhea makes it difficult for your body to absorb important nutrients, which can lead to malnutrition. Avoiding greasy, high-fat foods that trigger diarrhea is always a great idea, but be sure to work with your gastroenterologist to ensure you’re getting the proper nutrition.

Kidney stones are more frequently-occurring with Crohn’s patients than others, as inflammation of the small intestine makes it difficult for fat to absorb, which in turn binds with calcium to create these painful deposits.

Skin inflammation
Puffy eyes and lips are caused by inflammation stemming from Crohn’s. Likewise, tender patches of skin are common, which can lead to skin tags.

Without treatment, Crohn’s does worsen. The disease can lead to malnutrition, emotional distress, and severe digestive complications like ulcers, fistulas, and intestinal blockage. While there is currently no cure, you can ease symptoms and reduce pain through professional help and appropriate medication. If you experience any of these symptoms, schedule an appointment with a gastrointestinal specialist and begin the road to recovery today!