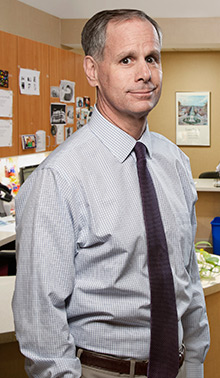 Dr. Rufus Davis is a native of Charlottesville, Va., and he attained a Bachelor of Arts from Yale University in 1985. He was a recipient of the J. B. Lewis Scholarship, and he completed his M.D. at the University of Virginia in 1990. From there he went to Nashville and completed his internal medicine internship and residency at Vanderbilt University Medical Center. He completed his gastroenterology fellowship from Vanderbilt in 1996.

From 1996 to 2000, Dr. Davis served as chief of the GI section at the University of Tennessee Baptist Hospital. He also served as an adjunct clinical instructor in the division of gastroenterology at Vanderbilt. He moved to Richmond in 2000 and joined GSI. He has a loyal following of patients on the Southside of Richmond and on the Northside at Retreat.

He and his wife, Beverley, are active community supporters.