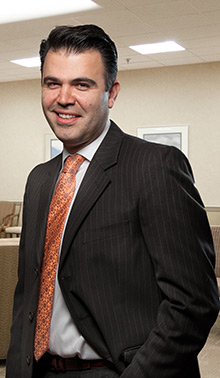 Dr. Ramy Eid is a board-certified gastroenterologist who has been in practice since 2002. He graduated from the Lebanese University School of Medicine in 1995 and completed a year of surgical internship before he started residency in Internal Medicine at Staten Island hospital SUNY program, which he completed in 1999. There he achieved the Humanistic Award of the Year, the Resident Research Competition Award for the New York chapter of the American College of Gastroenterology.

He then completed a Fellowship in Gastroenterology at Brown University in Providence, R.I., in 2002. He was appointed an assistant Professor of Medicine at Brown University, serving from 2002 until 2006, where he achieved the Dean’s Teaching Excellence Award. Dr. Eid was also a Staff Physician for Rhode Island Hospital, and he served as the Director of Endoscopy for the Providence Veteran’s Administration.

He joined GSI in January 2006 with St. Francis as a primary hospital for his thriving practice. Dr. Eid and his wife, Laura, have two children. He enjoys spending time with his family, cycling and sailing.